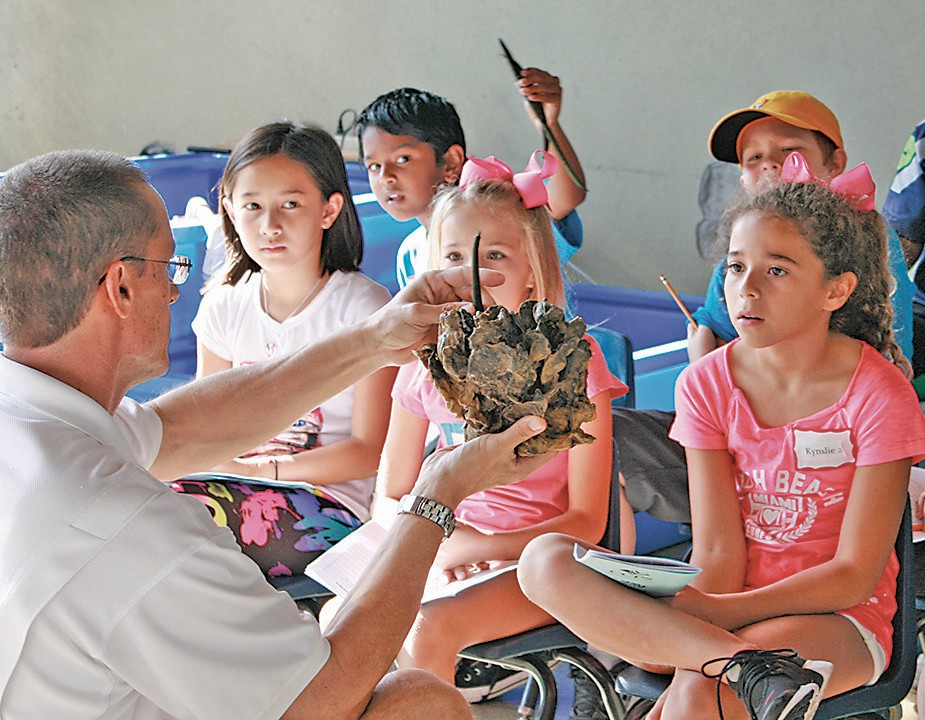 Goodland is awash in saltwater coming from the west and freshwater coming from the east. During the rainy season, the freshwater wins, often bringing with it an alligator or two. For the rest of the year, salt water prevails. But always, at some point, the rivers from the land and the tides from the ocean meet and intermingle. The result is a brackish stew, teeming with life, introduced there by nature and, more recently, by Yamaha outboard motors. It is the goal and mission of Rookery Bay Reserve (RBR) to keep all this in balance. Goodland is ground zero for this phenomenon. On April 18, Keith Laakkonen, director of RBR since 2015, addressed a well-attended Goodland Town Meeting and gave us an insight into his vision for RBR.

From RBR headquarters at Tower Road and CR 951, Laakkonen administers a sprawling 110,000-acre reserve, with 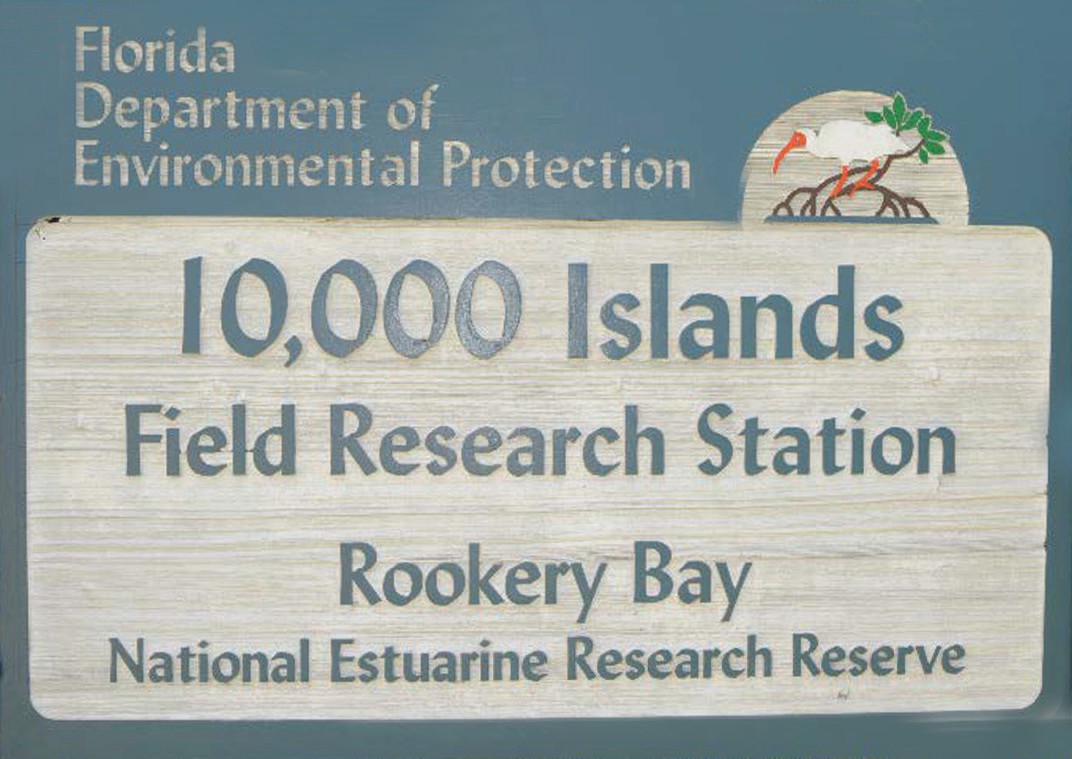 just under 40 on site employees. “It is one of the few remaining undisturbed mangrove estuaries in North America,” says Laakkonen, “It is our job to see that it stays that way, while providing recreational opportunities to our visitors.” Laakkonen estimates that the recreational fishing and boating industry contributes a combined $23 billion to the Florida coastal economy and that close to 107 million pounds of seafood are harvested from our state waters annually. The estuaries are prime incubators of this coastal bounty. RBR is just one of 41 aquatic preserves, which encircle Florida like a necklace. It may also be the most unique. The Florida Department of Environmental

Protection (DEP) is vitally interested in protecting and sustaining Florida’s coastal areas, which in turn contribute so much to our economy. Under DEP auspices, RBR is on the front lines of this effort.

Artist’s concept of new facility to be built in the coming year. It will feature additional dormitories for visiting scientists, a kitchen area, and additional work space for researchers and students.

1960s, environmentalists were beginning to notice that upstream development was starting to adversely affect our Collier County estuary. In response to this threat, the Collier County Conservancy (the Conservancy) was formed in 1965, and began raising money to buy and protect lands within the estuary. The catalyst was a 1963 plan to build a 10-mile loop road though the estuary. Four thousand Greater Naples school children ran a penny drive in an effort to stop this construction. The combined efforts were successful, and the road was never built. Over the next 13 years, the Conservancy, supported by the Florida Audubon Society (FAS) and others, spearheaded fundraising efforts which raised $1.7M, and added about 16,688 acres of protected land within the estuary. The climax came in 1978, when the Florida DEP, in a lawsuit instigated by the Conservancy and others, won a settlement from

RBR’s current facility. Built in 1964 and acquired by RBR in 1985, this facility has been used for research from the time it was first built. It does not meet FEMA elevation standards and must be replaced.

the Deltona Corporation, which resulted in keeping Deltona’s bulldozers from developing 3,200 acres of wetlands, adjacent to Marco Island. (A 1984 land swap agreement with Deltona brought in an additional 13,000 acres of adjacent wetlands to the RBR.)

The 1978 Deltona settlement was a watershed (pun intended) event in the embattled arena of Florida coastal development. It marked the end of an era and the beginning of another. Following closely on the heels of the settlement, The U.S. Dept. of Commerce’s National Oceanic and Atmospheric Administration (NOAA), after a tedious and drawn out application process, designated the nearby estuary as the Rookery Bay National Estuarine Research Reserve. It was one of the first 3 reserves in the nationwide system, says Renee Wilson, RBR’s Communications Coordinator. Today there are 29 such reserves protecting more than 1.3 million acres of estuaries. The RBR designation brought with 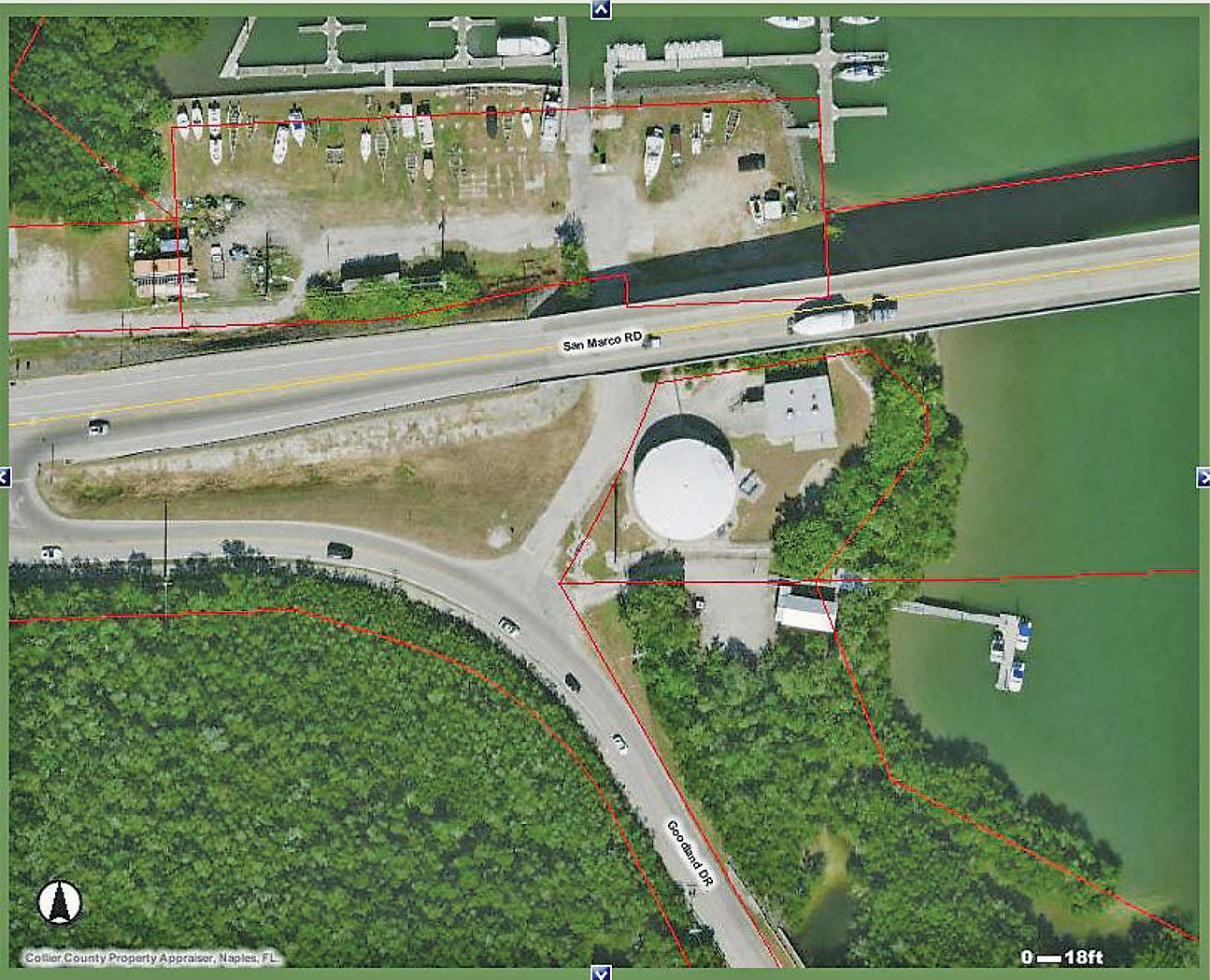 Aerial view of Field Station. Goodland Water Tank at center, Field Station and dock to its left. Note how station cannot be seen from Goodland Road because of luxuriant mangrove forest.

it a stream of federal funding, which is disbursed and managed through the Florida DEP. The also ensures more success in applying for grants. Starting with 9,600 acres in 1978, the RBR was expanded to 110,000 acres in the 90s through state funded land acquisition programs, such as Florida Forever, says Wilson.

In 1987, RBR had only three full time staffers responsible for managing 9,000 acres. Then, as now, says Wilson, their mission was to promote informed coastal decisions about estuaries though research and education. This was and is still done by monitoring the water quality, environmental education for local students, and supporting visiting researchers with their studies – a daunting menu of tasks for 3 staffers. To achieve a better outcome with limited resources, RBR established a local non-profit Friends group to help engage the community and to raise funds for RBR’s ongoing 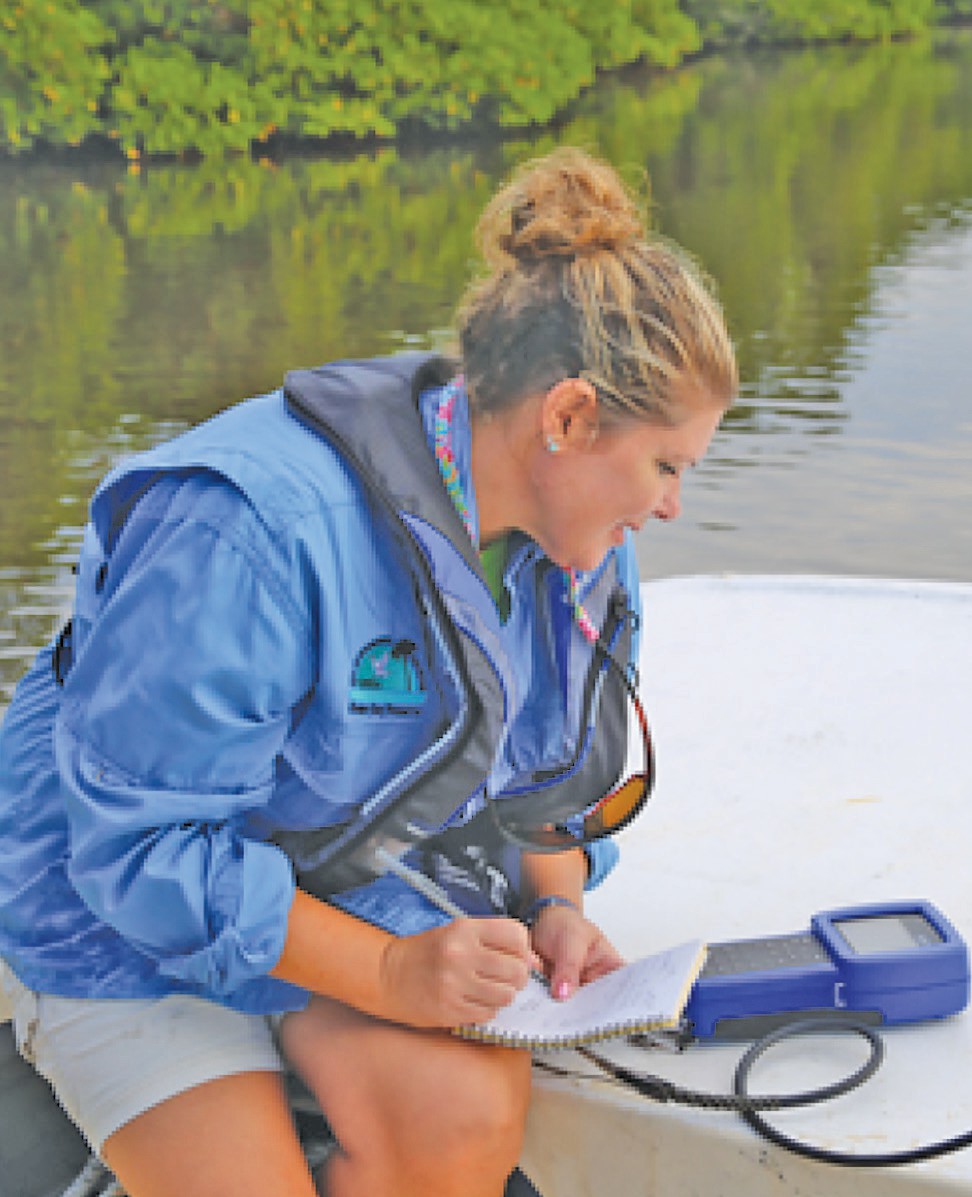 A member of RBR’s staff swaps out an apparatus measuring the chemical composition of the water. The apparatus makes a reading every 15 minutes. The equipment will be taken to RBR’s HQ where the readings will be downloaded and analyzed.

work. “The Friends of Rookery Bay (FRB) started with a handful of local residents,” Wilson said, “Each kicked in $10 toward the filing fee.” Today it has grown to more than 800 members and brings in over $100,000 annually to help match federal and state funds for the Reserve. Team Ocean is another volunteer program supporting RBR. “[Through their extensive membership of boaters], they make weekly visits to high-use areas, setting a good example and ensuring that fellow boaters are being responsible” says Wilson, “They keep us informed about what is going on out there.”

Of the 37 current employees at RBR, over half are directly engaged in research, education and coastal stewardship – RBR’s primary mission. The rest keep the place up and running. “Every job is different,” says Wilson, “Positions in our research and resource management would be required to have a 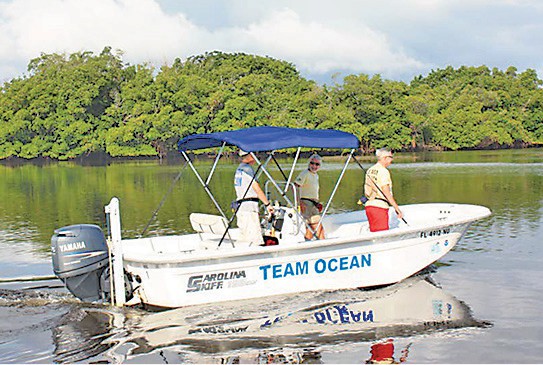 A Team Ocean boat heads to a high use area in the estuary. Team Ocean, an organization of local boaters, supports RBR by keeping tabs on what is going on in the high use areas and reporting their findings to RBR.

degree in natural science. Some of the others have science backgrounds also.” One of the jobs that gets them out of RBR’s headquarters and into the wild is the maintenance of RBR’s six water quality monitoring stations, one of which is in Henderson Creek. “Our equipment automatically takes water chemistry readings every 15 minutes,” says Wilson, “Research staff needs to periodically swap them out and keep them in running condition.”

But the big news, which Director Laakkonen wanted to share, is that RBR has secured funding which will enable it to replace and significantly upgrade its 10,000 Islands Field Station. To the right of the Goodland Water Tank, and sheltered, out of sight, by mangrove forest, is the tiny edifice, built in 1964 and acquired in 1985, which has served as a field station for the 10,000 Islands. It has been used for years 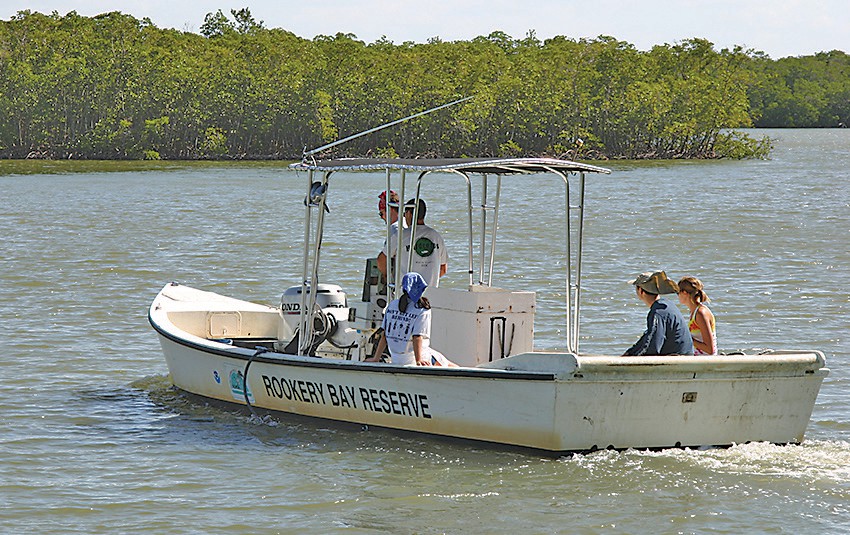 An RBR research boat on the way to another mission. Rigged as a mullet boat, this craft can navigate in shallow places.

by researchers, students and visiting scientists, studying the Everglades ecosystem. In order to make it compliant with the new FEMA elevation regulations and add dormitory space and kitchen facilities, the present structure will be removed and a new one built in the coming year. It will be able to accommodate more scientists for longer periods of time, as well as provide staff researchers and students with additional working space. It will include environmentally friendly water collection and solar power systems. Laakkonen is admittedly excited about the prospect. “It is a win-win situation,” he said, “not only for RBR, but for the critters and plants who call our estuary home.”